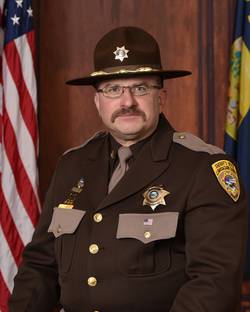 Undersheriff Brent Colbert is from Helena, Montana.  He graduated from Capital High School in 1987.  In 1989 he graduated from North Idaho College, in Coeur d’ Alene, Idaho, with an Associate’s degree in law enforcement.  After graduation he enlisted in the United States army, becoming a paratroop er for the 18th Airborne Corps.  Brent is a veteran of the Gulf War and spent some time with the 1st Armored Division.  In 1993, he married his wife, Cindi Englund, and they have two grown boys, Cody and Ian.

After discharging from the Army in 1995, Brent was hired by Sheriff Chuck O’Reilly to work in the Detention Center.  While working there he went back to school and received an Associate’s degree in administration.  Brent worked his way to the Detention Sergeant position, while also becoming a reserve deputy with this office.  In 2003, Brent was sworn in as a Deputy for the Lewis and Clark County Sheriff’s Office.

While on patrol, Brent spent a couple of year s as the Lincoln Substation Deputy then back to Helena to help with prisoner transports.  In 2009, he went back to the substations and spent some time in Wolf Creek and then back to Lincoln.  During all this time, Brent was a Field Training Officer (FTO), Taser Instructor, member of the Civil Disobedience Team and was also the Reserve Coordinator.  In 2013, he was named the Lewis and Clark County Sheriff’s Office Deputy of the year.  In 2016, Brent was promoted to Sergeant and worked patrol until 2017 when he was promoted to Captain and oversaw the patrol division.  He was also named the 2017 American Legion Law Enforcement Officer of the Year.  In 2018, he was named the Special Operations Captain, in charge of all special operations to include, a little later, overseeing the Coroner Division.

In 2019, Brent attended t he F.B.I. National Academy in Quantico, Virginia, session 276, internationally known for its academic excellence.  It is a ten-week advanced leadership and management training combining focused classroom and physical training for selected law enforcement officers with proven records as professionals with their agencies.

Brent is a member of the American Legion post 2, an avid outdoorsman, and enjoys time in his wood shop.  He is dedicated to his family, to the Sheriff’s Office, and to the citizens of Lewis and Clark County.