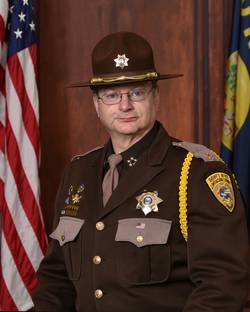 Sheriff Leo Dutton is originally from Sand Springs, Montana, where he graduated from Garfield County High School in 1978. Leo married his best friend and partner, Luci, in 1983. In December of that year, they moved to Helena. They have three wonderful children, Luke, Levi and Logan. Leo attended the University of Montana-College of Technology's Airframe and Power Plant program, graduating as a certified Airframe and Power Plant Mechanic in 1985. Leo is a certified flight instructor with a multi-engine rating. He worked full-time in Emergency Medical Services from June 1983 until April 2008, and in 1984, he began his law enforcement career as a reserve deputy for Lewis & Clark County.

In 1987, while working as a reserve deputy, Leo was accepted to the SWAT team and completed primary SWAT in 1989. He assisted the Lewis & Clark County SWAT team in obtaining the first licensed non-transporting medical tactical advanced life support team in Montana, known as the Special Events Advanced Life Support (SEALS). In 1993, Leo went on to earn his Advanced Open Water SCUBA diving certification. In 1996 Leo switched his primary career and became a full-time deputy, graduating from MLEA Basic #98, and was elected class representative, while simultaneously continuing his work as a paramedic part-time. During his time in the patrol division, he was selected to be a field-training officer (FTO) as well as being elected as one of the assistant team leaders of the tactical unit. Leo was given the Crime Stoppers Officer of the Year Award in 2000 and Officer of the Year from the Exchange Club in 2003. In 2000, Leo was promoted to patrol sergeant and went on to become Undersheriff of Lewis & Clark County in 2003.

Leo was sworn in as Sheriff of Lewis & Clark County on September 2, 2008. His duties as sheriff require the skills of an administrator and leader, including but not limited to managing a substantial budget and handling personnel issues within the LCSO. He strives to lead others in a combined vision to meet a common mission and uphold the core values established by the Lewis & Clark County Sheriff's Office. Leo has had extensive training in the National Incident Management System and has attended the F.B.I. Command College. Furthermore, Leo is and continues to be a member of the Critical Incident Debriefing Team. In addition, he also attended and completed the National Institute of Corrections course on Planning of New Intuitions. He completed the Sheriff's Institute program in Aurora, Colorado, sponsored by the National Sheriffs Association.

Leo acquired project management experience as a result of being one of the key people for the implementation of the Public Safety Communications Radio Project. Leo serves on several Governor-appointed Boards, including Montana Public Safety Radio Board, Montana Police Officer Standards and Training (POST), and the Montana Board of Crime Control. He is the chair of a regional mobile data consortium, a board member of the Montana Sheriffs and Peace Officers Association, a member of the State Tactical Commanders' Advisory Board, and a board member of the Helena Alliance Church. Leo is also an active member of Kiwanis International. In February, 2018, Leo was elected to the Western States Sheriffs Association executive board. The WSSA is comprised of 17 states west of the Mississippi River.