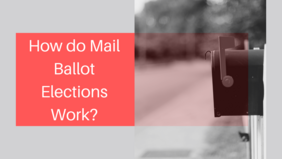 Governor Bullock issued a directive on August 6 granting counties the authority to conduct the upcoming election by mail ballot. The directive states that any county conducting a mail ballot election must also provide for in-person voting October 2 through Election Day.

The first thing to know is that in Lewis and Clark County, and indeed counties across Montana, we are accustomed to conducting elections by mail ballot. In fact, even in elections where polling places are open, most Montanans cast their vote absentee-by-mail.

There are laws and procedures in place that account for every ballot issued, received, and counted. These processes also ensure that every person's ballot is secret. Most importantly, these processes are open to public observation.

When someone registers to vote in Montana, a voter record is created by their county in the statewide election management and voter registration database. Every application received from a voter is scanned into this system.

A few weeks before election day, ballots are mailed to all registered voters with an Active voting status. Mailed ballot packets include the ballot (or ballots in a primary election), instructions, a ballot secrecy envelope, and a return envelope with the voter's affirmation.

In Lewis and Clark County, we set a goal of processing returned ballots the day they are received. Voters can track the status of federal election ballots online with the state's My Voter Page service at https://app.mt.gov/voterinfo/. The online tracking service is updated every night, so if we receive and process your ballot on Monday, you will be able to see that on My Voter Page on Tuesday.

The status of returned ballots is tracked in our election management and voter registration database. After processing batches of accepted ballots, we print a report from that database. Now we begin a series of reconciliation steps. First, staff ensure that each envelope reflected on the report is included in the batches, and vice versa. This is a double check to make sure the staff who processed the ballots in the system did everything correctly.

Once the secrecy envelopes are separated from the return envelopes, we cannot tie a particular ballot to a voter. We can still tie the reconciliation reports together, so we have a documented paper trail accounting for each ballot received.

Most importantly, the steps to protect the secret ballot make these processes transparent and open to public observation.