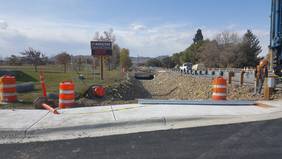 Lewis and Clark County has worked on flood mitigation in the Helena Valley for a number of years and the Trap Club project is a component of the larger Helena valley flood mitigation strategy.

The original scope of the project included purchasing an easement to use the Trap Club gravel pit as a stormwater retention pond, creating a formal diversion and flow control structure into the pit, and replacing three undersized culverts along North Montana Ave. and Sierra Road.

A Hydrologic and Hydraulic (H&H) study commissioned in 2015 used cutting edge technology to accurately model the valley and assess the effects of different types of floods as well as the effects of flood mitigation efforts that can be updated over time. The H&H study revealed the Trap Club project, as planned, wouldn't achieve the goal of the project and the County requested from FEMA a plan change in 2017.

“This project allows a substantial amount of water to be moved more effectively through this area,” said Lewis and Clark County Engineer Dan Karlin. “We will continue using the H&H study to look at the Valley to determine the next projects and incorporate new projects into the model as we progress through our mitigation efforts. We will look at all possible funding sources to best utilize our available funds as we did with this project.”

Funding for the project is as follows:

In July 2017, the Board of County Commissioners adopted a resolution to create a Rural Improvement District for flood mitigation in the valley. The RID currently encompasses 1,578 parcels and has an assessment of $100 per parcel per year. RID funds must be spent within the district boundary and will generally be used to provide matching funds for state and federal grants for projects outlined in the Helena Valley Flood Mitigation Master Plan. If grant applications are not successful, projects will be funded within the limited capacity of the RID.

“While this project took a few years to move through the process to completion, we are happy to have one more flood mitigation measure in place,” said County Commissioner Chairwoman Susan Good Geise. “We know the hardships faced by Rossiter School and the people in the Helena Valley when it comes to flooding and we will continue to look for ways to best expend our funding that will do the most good.”

Next steps include an update to the Helena Valley Flood Mitigation Master Plan paid for with a FEMA grant awarded in September 2018. The update will be a collaborative effort with community stakeholders to identify desired projects, model the identified projects for feasibility, create cost estimates and prioritize the feasible projects for future work. The amount of the update, including the County share, is $54,050.

“The update will serve as our roadmap for future projects, allowing the County to plan and budget accordingly,” added Karlin.

“With factors like climate change reshaping the way Montanans have to develop buildings, roads, and bridges, it’s critical that we make investments in our infrastructure that allow places like Rossiter Elementary School to keep their doors open,” Senator John Tester said. “Flood mitigation projects like this one help keep our infrastructure safe and up-to-date, and I’ll continue working to ensure that communities across the Treasure State have the tools they need to make these improvements happen.”

“Proactive projects like the Helena Valley Flood Mitigation will strengthen investment towards Montana’s critical infrastructure priorities including schools, roads and bridges,” Senator Steve Daines said. “I’m glad Lewis and Clark County received this $1.8 million investment in federal funding to ensure we protect Rossiter School from flooding. I’ll continue working side by side with our local communities to ensure their infrastructure needs are met and Montanans are safe.”

"I am pleased to see  this project come together and help protect the Rossiter School. It shows that good things can happen when local, state, and federal programs work together." Congressman Greg Gianforte.